The Global Economy continues to accelerate as global stimulus moves ahead and vaccinations roll out.  With stimulus coming from the 4 Corners of the Globe, whether the US, India, Nigeria, Chile, Japan, or elsewhere, a strong tailwind continues to drive the Global Ship.  And with vaccine production expected to reach 10 billion doses in 2021, enough for every person in the Globe, the currents slowing the Global Recovery appear set to dissipate, allowing the massive stimulus coupled with Global Reopening to drive the Global Ship forward with Gale Force Winds, enabling it to fly through the waters with the best growth since the 1990s.

And while the wind will propel the Global Ship for 2021 and 2022, a chop in the water will arise for those countries that experienced smooth sailing for the past 20 years and a wind will arise impeding their progress.  This new Trade Wind will force them to tack, slowing their progress.  As pointed out in the Global Economic Quarterly, Part I: The Reopening Force & The Fight For Global Growth (March, 2021), the Global Economy faces fundamental change in the way trade, currencies, and technology will impact individual countries moving forward.  This stems from the rising Geopolitical Strategic Rivalry between the U.S. and China, which forced the United States to reassess its existing economic and foreign policy.  With the start of a New Cold War and the need to meet this challenge, the U.S. moved to reclaim its Economic Growth and control its technology.  The economic consequences of such a shift in policy are vast and only beginning to impact the Trade Winds which support the economic models built by many countries around the Globe.

Critical to achieving these economic goals and reorienting its foreign policy, the US needs to continue to undo the economic harm caused by its entry into World Trade Organization in 2000 and the subsequent gaming of the WTO system by China and other Emerging Economies.  These countries utilized the new rules to propel their economies forward at the expense of the United States and other Developed Economies.  This change in orientation by the United States will mean several important things for the Global Economy.  First, the U.S. will reassess trade with China and other countries.  In doing so, it will put National Security as the primary driver.  This will force a change in Global Supply Chains as the U.S. moves to secure these Supply Chains with domestic and geographically close production, likely within NAFTA.  China already began to feel the bite of this change as the following table indicates: 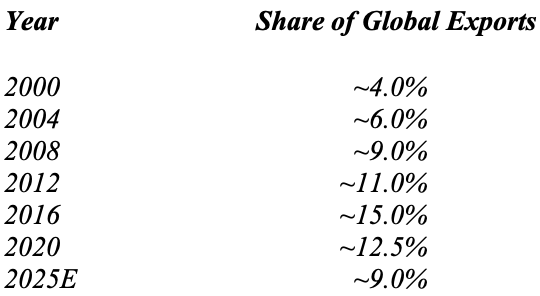 Data from CEIC, www.ceicdata.com, with Green Drake Advisors estimate for 2025.

As clearly demonstrated above, China’s share of Global Exports peaked in 2016 and turned down.  As the U.S moves to secure Global Supply Chains, China’s share of Global Exports will continue to drop, as the US moves to create production hubs in countries aligned with its needs, both economically and from a foreign policy perspective.  And for countries that moved to create large technology export hubs in Asia, tied to Chinese exports, by subsidizing manufacturing plant to drive their exports and economic growth, U.S. National Security will put a monkey wrench in their plans.  With the U.S. moving to protect critical supplies for National Defense, such as Advanced Semiconductor Production and Rare Earth Metals, and moving to put Supply Chains for future technologies within its grasp, such as those for Electric Vehicles and Hydrogen, growth in these countries will face a headwind slowing their growth.  For example, the U.S continues to focus on the construction of EV Battery Plants domestically along with the construction of plants to produce the anodes, cathodes, and chemicals needed for these batteries. While this will not impact 2021 or 2022, as a strong wind from the Global Recovery front’s arrival drives the Global Ship ahead utilizing existing Supply Chains, growth post these recovery years will begin to look quite different, as individual Country Ships face these new Trade Winds that will either impede their progress, forcing their Country Ships to alter course, or aid their journey, enabling them to arrive at their destinations sooner.

Second, countries that depreciate their currencies to improve their Global Competitive Position will find this activity meeting a much less receptive audience.  With National Security now dominating trade discussions, the ability to keep a currency undervalued despite large trade surpluses with the United States will come under increasing pressure.  Vietnam stands as the poster child that benefitted from this approach.  Not only have Vietnam’s exports to the United States risen significantly, but the U.S. represents a rising share of its exports.  From just 18% of Vietnam’s exports in 2013, the U.S. rose to 23% of Vietnam’s exports in 2017 and will likely comprise almost 30% of its exports in 2021.  (Data care of CEIC.)

With Vietnam targeting the United States as an export destination, the willingness of the U.S. to continue to allow exploding exports from the country will ultimately depend on whether Vietnam serves the National Security and strategic needs of the United States.  The price may come in the form of a naval base or other type of arrangement that serves U.S. strategic interests.  However, for Vietnam to expect the current state of affairs to continue without some Quid Pro Quo would be naïve.  Such an approach, which puts National Security and Global Strategic Position at the forefront, will change which countries retain the privilege of unfettered Most Favored Nation status and enjoy the current Trade Winds. As America looks to improve its Global Strategic Position, individual Country Ships will either align with the way the new Trade Winds blow or face a strong headwind.

And last, in order to meet the growing Global Strategic Threat from China, the U.S. began to reassess the location of Technology Manufacturing and R&D, both of which matter to National Security and to economic growth.  Countries that participate in the buildout and growth of new industries, all else standing equal, what economists call ceteris paribus, will grow faster, by definition, than those countries that only focus on legacy industries, which stand much more mature, and possess lower growth prospects.  Of course, this needs adjustment for a country that is just building out its modern infrastructure, such as Kenya or Tanzania in Africa, which should drive many years of strong economic growth.

While the U.S. produced 90%+ of the Technology it consumed in 2000, today the U.S produces less than 30% in many critical areas.  This includes broad areas such as PCs, servers, LEDs, and optical equipment, among others.  From a National Security perspective, this stands a massive vulnerability.  And from an Economic Growth perspective, this seriously impacts the ability of the U.S. to grow at a rapid rate.  Given that the United States now in a race with China to dominate the next generation of Technology, such as nano-technology, 3D manufacturing, quantum computing, and material science, as well as the global economy, policy stands in the midst of major change to meet this challenge, by resetting the rules and altering the Trade Winds to blow in a direction that will enable the U.S. Ship to once more to lead the race.  As a result, U.S. rules on what products can and cannot move outside the country will continue to tighten.  And spending, whether through dollars, subsidies, or tax incentives to ensure production of future leading edge and next generation Technology, will massively accelerate.  Furthermore, these policy goals will allocate significant capital to support the wholesale move of existing Technology Supply Chains out of China, Taiwan, Malaysia, and other Asian countries and back to North America.  The CHIPS Act represents just the tip of the iceberg and the first iceberg launched by the U.S.  In order to meet its policy goals, the U.S. will launch a whole flotilla of icebergs over the next few years.  These icebergs will force individual Country Ships to reroute their economies to avoid the Titanic’s fate.  And while companies such as Taiwan Semiconductor Manufacturing Corp. (TSMC) today believe they can build small semiconductor fabs in the United States and focus their leading edge capital in Taiwan, U.S. pressure over the next few years will grow massively, not only on such companies in a direct manner, but on their governments who wish both access to the U.S. markets and/or U.S. support in deterring China’s goals.

For those that choose to align with the U.S. strategically and understand the change in the Trade Winds, such as India, a more lenient policy may continue, as with India’s production of generic pharmaceuticals and vaccines.  For those that do not, the shift in the Trade Winds may cause masts to snap, stranding and setting adrift Country Ships to the vagaries of the Economic Ocean.  Either way, with the Trade Winds altering their course, A New Path Ahead continues to emerge.  One that will permanently change the routes Country Ships will travel,  And, in doing so, it will determine which Country Ships will possess advantage in their Economic Ocean journey as time passes and the Trade Winds continue their shift.

To go back to our Cover Letter click here