What’s Good for GM Is Not Good for America, Part V: The Coming Ascendance Of The National Interest, Reshoring, & Made In America

“The composition of our production and trade does influence our economic well-being.  Technology-intensive industries, in particular, make special contributions to the long-term health of the American economy.  A dollar’s worth of shoes may have the same effect on the trade balance as a dollar’s worth of computers.  But… the two do not have the same effect on employment, wages, labor skills, productivity, and research – all major determinants of our economic health.”

For U.S. corporations, the last 30 years provided them a golden age.  Utilizing NAFTA and then the WTO, companies gained the legal ability to relocate manufacturing operations overseas with no penalties.  Companies gained the ability to fire U.S. workers and replace them with foreign labor.  And companies gained the ability to cut deals with foreign governments to provide them access to local markets without needing to answer for the long term consequences of their actions on the United States.  These actions enabled corporate operating margins to increase significantly, as foreign countries paid for factories or massively subsidized their relocation, and for corporate revenue growth to accelerate, as companies gained access to hitherto closed markets.  All in all, NAFTA and the WTO turned into great deals for corporations.

However, for the United States and the American worker, these deals, which promised increased exports, higher investment, and better worker incomes for the United States, turned into nightmares.  The US Trade Deficit exploded upward and U.S. Gross Fixed Capital Formation (GFCF), what the average person would call Investment, headed downward.  The US only forestalled this during the early 2000s due to the unsustainable Housing Bubble.  Once that Bubble collapsed, as do all Bubbles, so did GFCF. 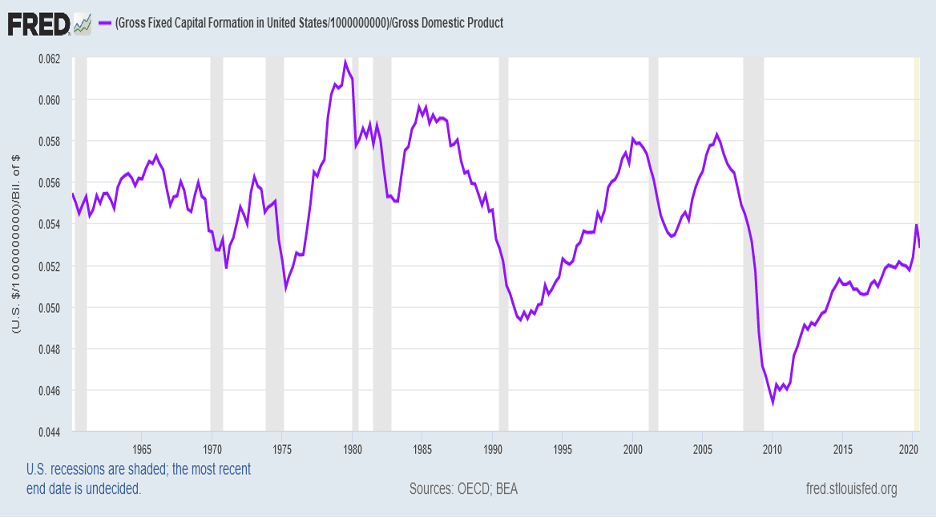 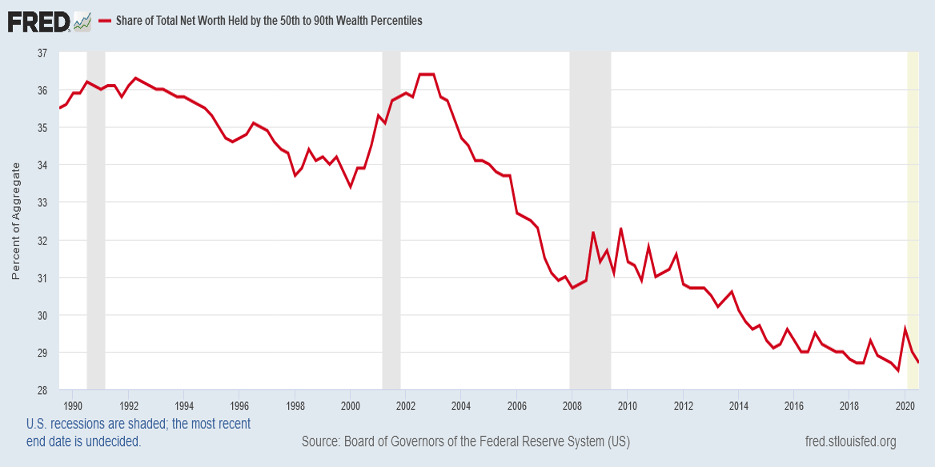 As this chart shows, their share of Net Worth fell by 7 Percentage Points.  This came from falling or stalling real incomes, in a growing economy, and the lessened ability to save.  Manufacturing Jobs tend to create strong incomes and each Manufacturing Job supports 5+ additional high paying jobs.  As factories moved overseas, these jobs were lost along with the attendant income. With the passage of time, the benefits to corporations contrasted massively with the negative impact on U.S. Investment, U.S. Productivity Growth, U.S. Median Family Income, and U.S. GDP Growth.  Thus, it became clear What Is Good For GM Is Not Good For America.

Second, with the rise of a new Global Strategic Rival in China, for the first time since the end of the Cold War with Russia, The National Interest became a top priority. To meet this threat, the U.S. once more needed its Manufacturing Output and GDP to grow at the historical rates that existed prior to 2000.  Under this priority, the actions by corporations over the decade and a half, from 2000 – 2015, to move manufacturing overseas to benefit their shareholders, including critical technology and other manufacturing combined with significant engineering work, became unacceptable.  By 2015, the need to fundamentally change policies on technology and investment to meet The National Interest were recognized by the Obama Administration. However, due to the late stage of the Administration and the election cycle, the ability to implement change stood limited.  With a new Administration in 2016, new policies reflecting The Ascendance of The National Interest could occur despite these policies ruffling more than a few political and corporate feathers.

To meet these two critical challenges, the Trump Administration spent its 4 years focused on putting the intellectual foundation in place to support The National Interest.  And, with the support of Congress, it expanded the role of committees, such as CFIUS, and strengthened administrative procedures to begin to address Corporations acting in ways that conflicted with the interests and goals of the United States.  Over time, as these actions and procedures become embedded in the economy, coupled with new technologies reaching commerciality and thus able to drive economic growth, these policies will create a large impact on overall US growth.  In the meantime, fortunately for the United States, the country remains a Research & Development (R&D) powerhouse.  Despite stagnant government funding of R&D, overall R&D compared to U.S. GDP continues to grow at a steady rate: 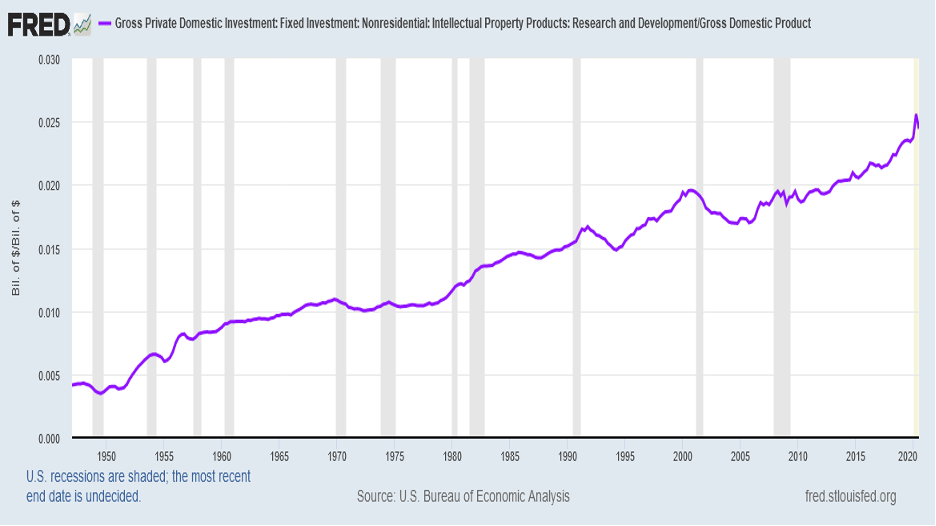 And the U.S. remains among the Top 2 countries granted patents on a global basis.  With rising political pressure on corporations to construct more manufacturing plant in the United States, starting under the Obama Administration, Manufacturing Investment relative to GDP appears to have bottomed and entered a long term uptrend: 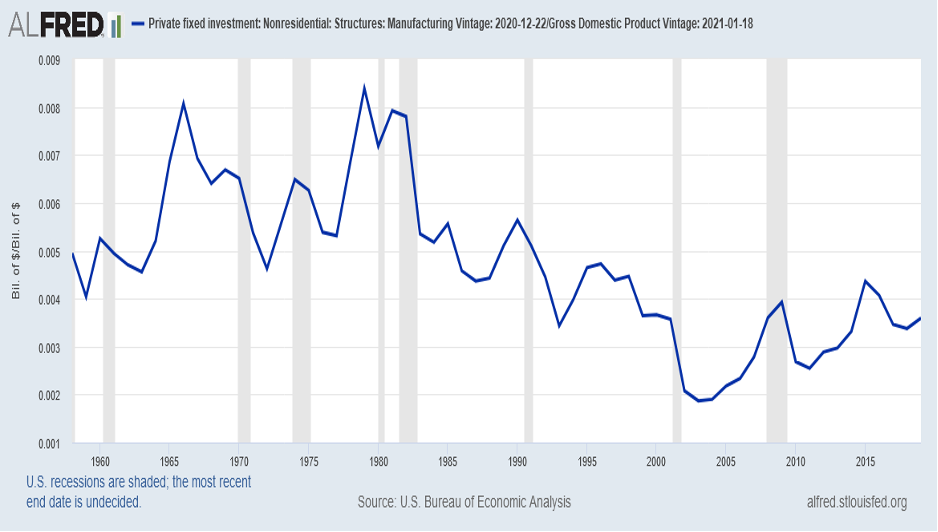 Given the moves by the US Government outlined above, it appears consistent with the policies enacted.  And while numerous media commentators and policy makers continue to denigrate the ability of the U.S. to once again stand a force in Global Manufacturing, the data above demonstrates Reshoring appears alive and well.  And given National Strategic Imperatives, this Reshoring likely will only accelerate in the period from 2021 – 2025 and continue to drive Manufacturing Investment to GDP higher.  For example, the U.S. began to push technology manufacturing back to domestic shores from overseas under the Trump Administration.  Most prominently, Taiwan Semiconductor Manufacturing Company agreed to construct an advanced semiconductor manufacturing plant in the U.S., whose completion will occur by Year End 2022.  While initially small at just 20,000 wafers per month (wpm), the output likely will grow dramatically as the U.S. forces the manufacture of servers, routers, cell phones, optical equipment, and other electronics back to domestic shores.  In addition, the U.S., over the past year, began to relocate leading edge technology supply chains back to the U.S.  For example, it pushed for existing and new companies to build a complete advanced battery manufacturing supply chain in the United States.  While this initially will focus on Lithium Ion and Solid State batteries for Electric Vehicles, it also looks to the future of Fuel Cell and Hydrogen Powered cars.  This likely stands the first supply chain of many the U.S. will encourage to Reshore. Furthermore, the U.S ramped up the use of CFIUS (The Committee on Foreign Investment in the U.S.).  And while companies and investment firms attempted last ditch efforts to avoid its jurisdiction through new structures, CFIUS reviews continue to grow rapidly, putting a halt to many proposed transactions as the government hires former investment bankers, venture capitalists, and private equity investors to ferret out the truth.  And these investigations don’t just stop with foreign investment into the U.S.  CFIUS’s role continues to grow as the U.S. moves to put an end to forced technology transfer in exchange for foreign market access.  In addition, CFIUS, the Office of the U.S. Trade Representative, and the National Security Council have moved to examine U.S companies “willingness” to hand over their technology to foreign or state backed companies in order to build plants or enter into a joint venture in a foreign jurisdiction.  And while China stands the most egregious actor in both these cases, other countries, such as Malaysia and Indonesia, practice similar tactics.

The latest example of an American company putting its interests ahead of the United States stands Faraday Future, one of the leading U.S. private Electric Vehicle (EV) companies that recently filed to go public.  Faraday Future stated the following in its press release announcing its IPO: “FF has built a strong portfolio for disruptive valuable technologies protected by nearly 900 filed or issued patents globally for its Variable Platform Architecture (“VPA”), Propulsion system, and Advanced I.A.I technology. According to a report by Randolph Square IP (“RSIP”), a patent data analysis firm, FF’s patent portfolio far exceeds that of incumbent OEMs.”  As part of its going public transaction, FF raised $1 billion in private investment prior to the IPO, with Geely, the #3 Chinese auto maker, leading the round.  In addition, it announced a partnership to build a plant in China.  Under this agreement, according to its investor presentation, a Tier 1 Chinese city will provide 330 acres of land and “provide a subsidy for the foreign investment efforts, such as tax benefits, and an additional subsidy for the establishment of a R&D center.”  In exchange for the government paying for much of the plant and a new R&D Center, Faraday Future will “contribute its brand and IP”.  Put simply, the Chinese government will buy the IP in exchange for building a plant and a R&D Center where Chinese scientists and engineers can then take the IP and share it with other Chinese companies.  For Faraday Future, unfortunately, such a transaction appears out of step with The National Interest. And with the Ascendance of The National Interest, transactions such as this will come under intense scrutiny as CFIUS and other government organizations move to block the acquisition of U.S. technology and leading manufacturing capabilities by foreign nations looking to acquire these capabilities for their own industry.

With the U.S. focus on both high tech and low tech Manufacturing, changing Investment patterns have started to create a real impact on Manufacturing Investment to GDP. And with this turning upward, one would expect Industrial Equipment to turn as well.  In fact, Industrial Equipment spending relative to GDP appears to have arrested its long term decline:

This basing pattern appears similar to post-World War II, when the country passed through a period of lower Equipment Investment after the massive investment that occurred during the war. With Equipment to GDP bottoming, actual dollars of Industrial Equipment Investment continue to reach new heights:

And with both Manufacturing Investment and Industrial Equipment Investment growing at or above GDP growth rates, they will begin to add to overall U.S. growth as opposed to subtract from it.  And with these trends in place, coupled with a likely push from the government to accelerate Reshoring, Made In America will once again sound like an every day happening.

For Corporate America, the Golden Age, whereby corporations could put shareholders above all else, appears at its end.  The Voters and the U.S. Government now march to a similar drummer despite massive corporate political donations.  And the drumming continues to grow louder, presaging The Coming Ascendance of new, unstoppable forces that will drive America forward.  Corporations, arrayed under the mantra, What Is Good for GM Is Not Good For America, stand ready to make one last desperate stand.  However, the coming forces, arrayed under The National Interest banner, represent an unstoppable tsunami that will crush all opposition.  In doing so, they will lead an army of Reshoring to victory.  With this new era almost upon the country, the clarion call not heard in more than 20 years will blare forth, signaling the beginning of a new era of Made in America once more.

To go back to our Cover Letter click here