“O Romeo, Romeo, Wherefore art though Romeo?
Deny thy father and refuse thy name.
Or, if thou wilt not, be but sworn my love,
And I’ll no longer be a Capulet.”

Juliet from her Balcony with Romeo hiding in her garden.
Act 2, Scene 2
Romeo and Juliet, 1597
William Shakespeare

With the Federal Reserve creating copious amounts of money, the question remains, why did inflation not ignite.  As laid out earlier this year, the massive explosion in Personal Savings offset much of the Fed’s money creation.  In addition, when examined in perspective of several years, the amount of money created merely offset the contraction in money engineered by the Federal Reserve from 2017 to 2019 and supplied the normal amount of currency needed to support economic growth.  Thus, reported inflation should remain quiescent for the time.  The question posed was: what happens when the economy recovers and the Personal Savings returns to the economy from the mattresses where it is stored.  The outcome was likened to the 1940s, which experienced inflation of over 5% per annum over the decade after a decade of deflation in the 1930s, with one post-war year showing strong double digit inflation.  For those with a few gray hairs, it looked much like what was experienced during the 1970s.

Well, the Personal Savings Rate fell over the last few months from 33%, where it peaked, back to 17% currently, as the following chart illustrates.

And, as predicted several months ago, it appears that this money found its way into the real economy, as Retail Sales recovered to pre-Pandemic levels and Home sales took off, along with sales of the associated goods needed for a Home.  Other data, such as the volume of food goods rising 3.9% year over year, confirm this data.

In addition to this money finding its way into the real economy, the Federal Reserve continues to print copious amounts of money.  For example, M2 grew from $15.5 trillion in March to $18.4 trillion in the latest data or almost 20% over the past six months.  Alternatively, to put this into perspective, the Fed added money equivalent to ~15% of GDP.  The following chart of MZM growth, the broadest measure of money, on a year over year basis, makes clear how aggressively the Fed acted:

Despite all this money sloshing around the system, according to the latest government statistics, the CPI only grew 1.0% year-over-year in July.  And the PPI fell 0.4% over the same time frame.  In other words, according to the government, there exists no inflation.

But, as the Bard might say, “Something is rotten in Denmark.”  or, in this case, the United States.  For data outside the government’s control appear to indicate otherwise.  The following Table lists real world data that impact the average American: 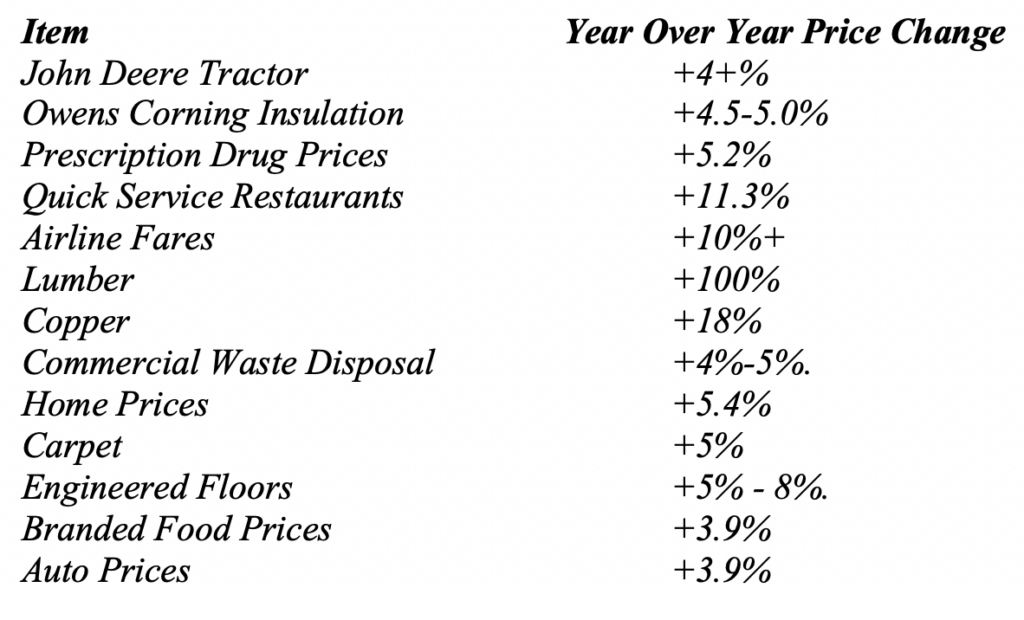 As the above data indicate, real world prices demonstrate a markedly different picture than that shown by the official statistics.  And they further indicate real signs of inflation in the economy not reported by the government.

To add fuel to this fire, the Federal Reserve just changed its official policy.  As Chairman Jerome Powell announced at Jackson Hole in his keynote speech, the Federal Reserve is going to Average Inflation Targeting.  This means, in practice, that they will allow a period of above average inflation should the inflation statistics stand below average for a period of time.  In other words, they created policy cover to allow inflation to rise, as the U.S. Government desires.  (Please see the following link to the Federal Reserve website  https://www.federalreserve.gov/newsevents/speech/powell20200827a.htm for Chairman Powell’s speech and https://www.federalreserve.gov/monetarypolicy/review-of-monetary-policy-strategy-tools-and-communications.htm for the official Review of Monetary Policy.)

The reason the U.S. Government desires Inflation to rise stands twofold.  First, as analyzed in 2015, with the government now tying all payments to citizens to the CPI Index, such as Social Security and Disability Benefits, there exists an economic incentive to understate true inflation to reduce the government’s real payments.  In other words, if the payments rise less than inflation, what the government truly pays its citizens shrinks over time.  Due to this, while Baby Boomers will receive real payments, that gradually shrink, under these programs over the next 10 – 20 years, Millennials likely will find that programs, such as Social Security, will provide supplemental income at best, due to the continual drop in their ability to buy the same basket of goods in the economy.  Hopefully, Social Security will still cover any Medicare premiums that the Millennials must pay when they retire.  Second, with the US Government running large budget deficits consistently over the past decade, at the same time as economic growth slowed markedly, the country’s outstanding Debt rose at a rapid rate. With the pandemic this year, the government entered into massive deficit spending, which only exploded the Debt, as the following chart shows:

Debt spending by governments makes sense if the economy grows at a rate, so that the debt relative to GDP does not get out of control and the interest costs of that debt remain bearable.  However, as the following chart shows, US Debt to GDP now stands at over 100%, the highest level since World War II:

And with the budget deficit projected at a mere 8.6% for 2021, according to the Congressional Budget Office, this number should continue to rise.

For those unfamiliar with U.S. economic history, the United States possesses a long and illustrious history of using Inflation to solve its spending and debt problems.  This started with the Revolutionary War, when the Continental Congress issued copious amounts of currency called Continentals to pay for the war.  Unfortunately, this was not backed by any asset and eventually saw its value drop over 99% from 1775 to 1779.  It led to the famous saying “Not Worth a Continental”.  (Please see Not Worth a Continental: A Brief History Lesson & The Coming Inflation published on January 31, 2013.)  The U.S. experienced similar bouts of Inflation after the War of 1812, the Civil War, World War I, World War II, and the Vietnam War.  For those who lived through the 1940s, the value of a US Dollar dropped 46% over the decade, as a citizen could only buy 54% of the goods they could in 1940 with a US Dollar in 1950.  For those who lived through the Inflationary 1970s, as did the Baby Boomers as well as their parents, the value of a US Dollar dropped 67% over the decade.  There exists a famous magazine cover from Time Magazine from 1980, prior to Paul Volcker crushing inflation, showing a dollar only bought 33% of the goods in 1980 that it could in 1970.

Given the above date and U.S. economic history, the government appears set to embark on another round of inflation.  Already, the Federal Reserve put in place official policies for the United States to support creating higher Inflation.  And with Debt to GDP exceeding 100% and set to rise further coupled with the massive social obligations the government committed to paying, the incentive to move down this pathway continues upward.  The only policy tool lacking stands Yield Curve Control, in which the government, through the Federal Reserve, controls interest rates in order for interest payments by the government to remain reasonable and not explode upward as markets adjust to higher inflation.  This also ensures that the government can continue to rollover its debt and not experience a debt crisis.  For creditors, well, that is another story.  As occurred from the 1770s to 1970s, they did not fare so well.  In fact, one might say the government’s gain came at their expense.  And one can re-envision the scene in Romeo and Juliet, where Juliet calls out to the night lamenting her missing Romeo and Romeo responds as they pour forth their true love, replaced with the following line, with the U.S. Government standing in for Juliet and saying: “O Inflation, Inflation, Wherefore Art Thou Inflation?”.  And, much to its relief, hearing the sweet, sound of a voice in the darkness cry out, answering: “Call me but love, and I’ll be new baptized.  Henceforth I never will be Inflation.”  (Data from Federal Reserve, U.S. Census Bureau, company reports, and company press releases combined with Green Drake Advisors analysis plus a liberal interpretation of William Shakespeare.)