The Great Game of Power: Space, The Next Frontier

“The Department of Defense (DOD) is embarking on the most significant transformation in the history of the U.S. national security space program.  Space is now a distinct warfighting domain, demanding enterprise-wide changes to policies, strategies, operations, investments, capabilities, and expertise for a new strategic environment.  This strategy identifies how DoD will advance spacepower to enable the Department to compete, deter, and win in a complex security environment characterized by great power competition.”

“Successful crime is dignified with the name of virtue;
The good become the slaves of the impious;
Might makes right;
Fear silences the power of the Law.”

For those who think of Space as a great exploratory domain and imagine it in terms of Star Trek, where the Earth stands united against all, a different vision might prove more realistic instead.  This version, presented in the Amazon series The Expanse, demonstrates significant conflict and rivalry as various groups move to control vast regions of space.  In this version, political manipulation, movement of assets into key strategic positions, and open warfare occurs.  And while this is a much darker reflection of reality, it demonstrates how competing interests can lead to conflict, regardless of the actions of most leaders involved, when individual groups move to assert control.  In many ways, this merely reflects the movement of The Great Game of Power to Space.

That aptly describes exactly what occurred over the past 10 years and foreshadows a struggle that will dominate the next several decades.  For to dominate Space, enables the domination of Earth and enables the control of vast resources in space that can feed and grow a country’s economy, strengthening its economic and military might.  As such, the race to dominate Space continues to heat up.  And while this does not make front page news, every major country in the world issued position papers on Space, over the past 5 years, stating their interpretation of Space Law, clearly articulating their interest in commercial participation in Space, and strongly defending their right to take military action to protect their economic position in Space.  For those familiar with the politics of the 19th Century, it is Realpoitik comes to Space.

While currently a small portion of the Global Economy, at $345 billion, the Global Space Market continues to grow rapidly, with the expectation that it will exceed $1 trillion by 2030.  The Global Space Economy breaks down into Government and Commercial spending.  The breakdown is as follows:

And while this is the official breakdown, there exists a fine line between government and commercial in rockets and satellites, with the government often funding the R&D to create both, which have dual uses for both commercial and military.

Before a dive into some of the international intrigue ahead, a clear understanding of some basic physics needs to occur.  Think of Space as a vast ocean.  In it, there are currents called gravitational fields that can assist or hinder travel.  As a result, there exist well defined optimal passageways between two places that can minimize the use of energy to get from Point A to Point B.  This is critical as Propulsion (delta-v for scientists) becomes the gating factor, due to current propulsion technology and the limited amount of fuel that a spacecraft can carry.  In addition, there are points in Space, call them resupply depots, that enable a space station to maintain a consistent position with no expenditure of energy.  These are called Libration Points, known in math as Lagrangian Points. At these points, the gravitational fields from different planets and moons cancels out.  Thus, an object can remain stationary there.  This makes them optimal points to set up resupply stations that do not sit on the surface of an object, such as the Earth’s Moon.  There exist 5 of these points surrounding the Earth and Moon: 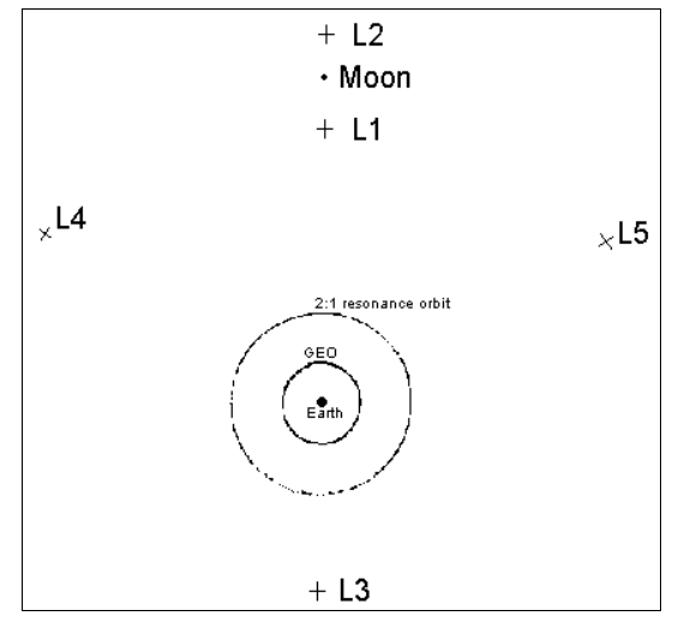 Chart courtesy of Permanent.com and can be found at: https://www.permanent.com/space-transportation-earth-moon-libration-points.html

As the above chart makes clear, these locations in Space become desirable in placing resupply depots in orbit for travel between points or for locating industrial facilities, to manufacture objects needed by spacecraft, due to the negligible use of energy to remain in place.  (For those mathematically inclined, please see the following article in Wikipedia for the equations behind these points.  It can be found at: https://en.wikipedia.org/wiki/Lagrangian_point .)  While visually Points L1 and L2 appear the most stable, the actual most stable points are L4 and L5, which provide flanking positions around the Moon.  That these points are important can be seen by the recent positioning of a communications satellite at L2 by China.  They plan to use it to support their planned Moon Base at the Moon’s Southern Pole.  The Chinese named it Quequiao, Magpie Bridge.  This refers to the famous Chinese mythology about Zhi Nu, the seventh daughter of the goddess of heaven, who used a magpie bridge to connect with her husband on the seventh day of the seventh month of the lunar calendar.

For countries looking to control these Libration Points, given the state of technology and the current limitations of propulsion technology, it turns out that controlling Low Earth Orbit (LEO), becomes critical.  It allows for the projection of power both to the ground on Earth and to the key Libration Points in Space, as well as the Moon.   So, from a tactical standpoint, while it ultimately will prove important to control L1 – L5, the key strategic position will stem from controlling the space around the Earth, in particular, the band called Low Earth Orbit.  This is the likely distance at which spacecraft will refuel for flight into deep space.  Thus, it becomes a key strategic point for any country looking to exploit Space. It stands also as the height at which many communication satellites are located and the probable location for future solar energy collection that will then be beamed down to Earth.  In addition, it could change the Balance of Power on the ground on Earth.  The reason for this is control of LEO allows for strong intelligence capabilities, what military strategists call situational awareness.  It also enables the pre-positioning of strike capability and anti-access capabilities, which allow for the projection of force and the denial of an opponent’s force.  Especially, given the development of Hypersonic Weapons, this could enable a country, like the US, to project power in Asia which could offset China’s and Russia’s natural geographic advantage of short supply lines.

This appears the pathway in which the world finds itself with the struggle for control of Space just beginning.  In July of 2019, the French Ministry of the Armed Forces published Space Defense Strategy, which lays out the country’s recognition of the changes in Space over the past decade.  The opening overview states the following:

The sudden emergence of disruptive innovation methods in the space sector – known generically as “New Space” – calls for a change in the way we approach the development of our space capabilities. Alongside central governments, private-sector actors play a key role in the economic development of a space industry which is now more flexible, more innovative, more connected to other segments of the economy. The United States and China have long grasped the importance of this crucial turning-point for the development of our societies. Europe and France cannot turn a blind eye to an emerging area of potential conflict.

That is why the President of the Republic has made space a priority for our defence. We must concentrate our efforts on identifying and characterising unfriendly or hostile acts in the vicinity of our satellites, on continuing to develop our means of operational support, protecting our space assets and discouraging our adversaries from harming them. In response to these challenges, the Armed Forces Ministry has devised an ambitious space defence strategy for the period to 2030, spanning all aspects.

As this clearly states, France and Europe will need to take action.  (For the full report, please see: https://www.defense.gouv.fr/content/download/574375/9839912/Space%20Defence%20Strategy%202019_France.pdf . )  And France laid out a plan to put in place the necessary assets to achieve its strategy by the year 2030.  With assets such as Arianespace as well as satellite manufacturing capabilities, the French government possesses the initial grubstake to become a major player and a central part of the European approach to this Space Race.

For the U.S., actions to create an official Space Strategy began earlier, starting in 2017.  And well before that, the U.S. military saw the coming race for Space.  To meet the challenges, it provided initial R&D funding, in conjunction with private capital, to create a new generation of rockets.  (This became necessary as Lockheed Martin and Boeing merged their rocket businesses in 2006 to create a monopoly, eliminating competition, which then raised prices significantly to the government.)  As these are long lead time items, sometimes taking a decade to go from concept to reality, such vision becomes critical.  The key new companies in the U.S. are Space X, headed by Elon Musk, and Blue Origin, headed by Jeff Bezos.  With new designs, the creation of reusable stages, and advanced manufacturing, Space X became the global low cost provider of launch services for satellites, with costs well below European and Chinese competition.  In addition, the entry of Space X forced ULA to develop new rockets with lower costs that could compete for DOD business.  As part of this, ULA developed a reusable Space Plane that sits on top of a rocket to launch satellites and classified space experiments.  Lastly, the U.S. DOD recently provided funding to multiple companies to provide small payload launches, which are less than 400 pounds.  In other words, they funded companies to put small, inexpensive LEO satellites and space assets into orbit cheaply and quickly.  Companies funded under this initiative include SpaceX, Xbow Launch Systems, Northrop Grumman, Xbow Launch Systems, Firefly Black LLC, ULA, Aevum Inc., and Rocket Lab USA.

To understand the priority that the U.S. government places on Space, one merely can follow the dollars of spending.  After increasing Space spending significantly over the past 5 years, the U.S. Defense Budget for F2021, starting in September 2020, increases the funding of the Space portfolio by over 30%, with an emphasis on R&D, which rose almost 50%.  The increase this year brings the overall spending on Space to 2x the level in the F2017 Budget.  Funding for F2021 includes design and development of the following:

In addition to the above, the F2021 Budget requests a 12% increase in the budget for NASA.  These funds will support the necessary investment needed to prepare for human space travel to the Moon and Mars.  These can be seen in the Deep Space Exploration Budget which rose from $5.0 billion in F2019 to $6.0 billion in F2020, with a projected rise to $8.8 billion in F2021 and a projected peak of $11.6 billion in 2023.

With the US, China, and Russia leading the way and the rest of the globe following, the Race for Space continues to heat up.  And with the stakes high, no country will cede ground willingly.  As this race grows more heated over the next decade, inevitably, conflict will emerge.  This will occur as countries compete for satellite and space asset positions in LEO and GEO (Geosynchronous Earth Orbit) altitudes, compete for space station and resupply depot locations in Earth Orbit and at Libration Points, and compete for Moon base locations and the massive mineral resources.  Longer term, establishment of permanent operations on Mars will lead to a jockeying for the prime locations that provide optimal paths to fly between the Earth and Mars, as well as the Moon and Mars.  With the vision provided by the series The Expanse appearing to come to fruition as The Great Game of Power moves to Space, it truly will become Space, The Next Frontier.  (Data from NASA, US DOD, US Congress, Geopolitical Futures, and Jefferies LLC combined with Green Drake Advisors analysis.)