The Great Game of Power: The Coming National Security Debate – Just In Time or Just In Case

“The military threat is but one menace to our freedom and security.  We must not only deter aggression; we must also frustrate the effort of the Communists to gain their goals by subversion.  To this end, free nations must maintain and reinforce their cohesion, their internal security, their political and economic vitality, and their faith in freedom.

Our efforts to defend our freedom and to secure a just peace are, of course, inseparable from the second great purpose of our government: to help maintain a strong, growing economy – an economy vigorous and free, in which there are ever increasing opportunities, just rewards for effort, and a stable prosperity that is widely shared.”

For the past 30 years, under the North American Free Trade Agreement (NAFTA) and then the World Trade Organization (WTO), U.S. companies moved production first to Mexico and then overseas to Developing Countries.  This served two purposes.  First, it lowered the costs of production as companies avoided environmental and government regulations in the US.  In addition, the cost of constructing plants fell as foreign governments subsidized the location of these plants in their countries in order to build up their industry.  Lastly, labor costs dropped significantly as corporations performed global labor arbitrage, replacing US workers with low cost labor elsewhere. Second, corporations obtained access to previously closed economies, enabling them to expand the market for their goods and to continue to grow their companies at a more rapid pace.  This growing global footprint allowed them to become less dependent on the U.S. and Europe by diversifying their revenue base across the world.  In addition, it improved these multi-national corporations’ global competitive position.

While all these actions led to positive results for individual companies, it led to a poor result for the United States.  As a result of these collective actions, encouraged by the government through mechanisms like NAFTA and the WTO and through the non-enforcement of technology export rules, capital formation related to manufacturing in the United States collapsed:

Furthermore, as a result of the collapse in manufacturing investment, equipment investment took it on the chin once the WTO came into being, encouraging plant relocation overseas and the creation of global, as opposed to national, supply chains:

To offset this lack of investment, the government, in the early 2000’s, encouraged excess investment into Housing to offset the manufacturing shortfall and prevent Manufacturing Productivity from collapsing:

This worked for a while, but when the inevitable collapse in Housing Investment occurred, it led to a collapse in Manufacturing Productivity as well:

And, excluding the normal recessionary jump, Manufacturing Productivity averaged less than zero this past economic cycle as U.S. plants continued to produce fewer and fewer goods and more goods continued to be produced overseas.

Today the U.S. produces only half the goods it consumes and, for some critical areas, such as computer and electronic products, this amounts to less than 30%.  This compares to the 1990s when the U.S. produced more than 80% of the goods it consumed and over 90% of all technology goods.  According to the Department of Commerce, U.S. manufacturing value add totaled just 53% of the content of all manufactured goods in 2015, the latest date for which there is real government data, and just 28% for computer and electronic products. 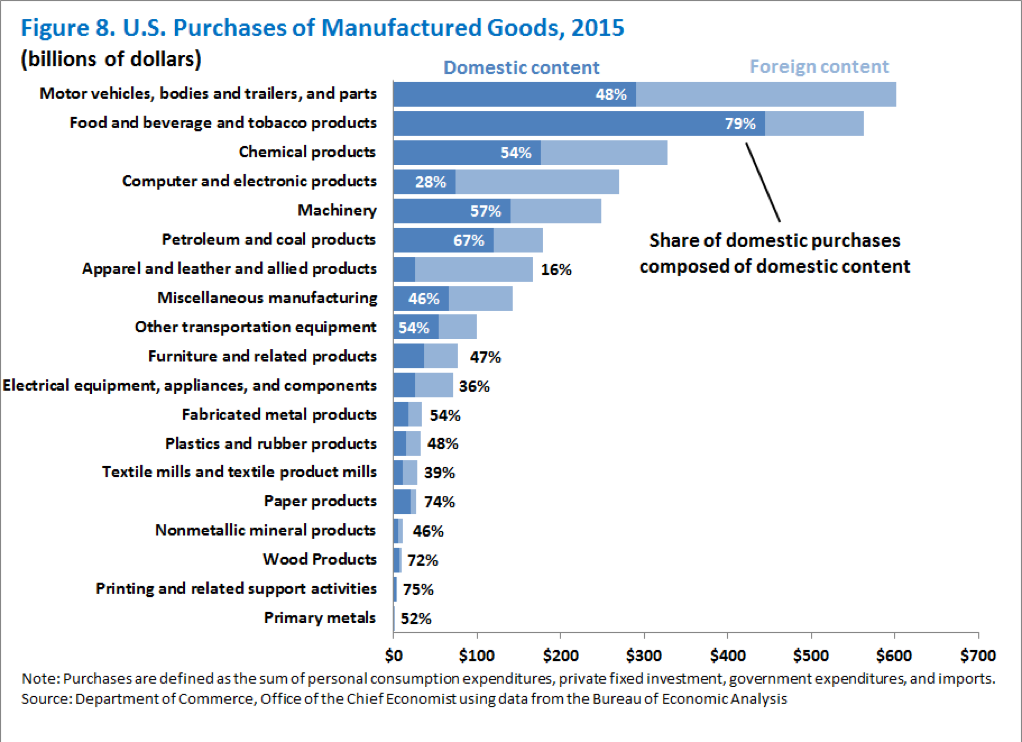 Please see their report at:  https://www.commerce.gov/sites/default/files/migrated/reports/2015-what-is-made-in-america_0.pdf .  Traditionally, prior to the 2000s, the U.S. maintained its manufacturing base for National Security reasons.  But, with the “end of the Cold War”, large corporations convinced the government that opening the economy to foreign made goods in Developing Economies in exchange for “access” to their markets would benefit US production of goods.  Of course, the opposite occurred as documented above.

None of this becomes an issue if there are no disruptions to the availability of goods and inputs from abroad and National Security does not become an issue.  However, with the rise of China as a global rival to the U.S. and the Return of the Cold War, where goods get produced becomes an issue.  And this issue reared its ugly head during the ongoing Coronavirus epidemic.  Somehow, the U.S. found itself short of face masks, medical supplies, testing supplies, critical medicines, and chemicals needed to produce various medicines as the global supply chain shut down.  In particular, it became apparent how vulnerable the U.S. stood in a National Emergency should China shut its exports down.  And shut them down it did through an Emergency Decree on March 31 to “regulate” the quality of the products.  This led to a shortage of masks, gowns, ventilators, chemical reagents, … around the world.  In addition, numerous products produced by China did not meet the specifications of those products.  For example, The Netherlands recalled 600,000 Chinese masks with faulty filters.  Canada received 1 million N95 Masks that did not pass inspection.  The words of President Dwight D. Eisenhower from his Second Inaugural Address appear to have been forgotten:

“An industry capable of rapid expansion and essential materials and facilities swiftly available in time of emergency are indispensable to our defense.  I urge, therefore, a two-year extension of the Defense Production Act and Title II of the First War Powers Act of 1941.  These are cornerstones of our program for the development and maintenance of an adequate mobilization base.”

The U.S. and other countries stood vulnerable as they allowed their medical and pharmaceutical supply infrastructure to migrate overseas to developing nations without the regulatory infrastructure and quality control these products require.  In response to this national emergency, the U.S. Congress allocated billions of dollars to create infrastructure on an emergency basis in the U.S., a very expensive way to address the problem.

And while the current emergency occurred over an epidemic, given recent events overseas, this easily could morph to an international confrontation between China and the U.S.  While the world media remains focused on the COVID 19 epidemic, action heated up in the South China Sea.  Over the past few weeks, China not so quietly sank a Vietnamese fishing boat in Vietnam’s waters.  Chinese military ships entered Malaysia’s territorial waters to trail its oil exploration vessels.  And China increased its harassment of Indonesian fishing vessels in Indonesia’s waters.  Furthermore, China just announced its sovereignty over several islands that belong to The Philippines and Vietnam, over both countries protests.

In belated recognition of the U.S. vulnerability in a future emergency, Senator Marco Rubio proposed the Fair Trade with China Enforcement Act, which is receiving bipartisan support.  This Act clamps down further on technology and IP exports and goes after China’s Made in China 2025 policy by requiring the Commerce Department to list all products which are the focus of this policy.  With China running a blatantly mercantilist economic policy by subsidizing key technology industries, such a bill stands long overdue.  For example, Chinese LCD manufacturers continue to lose money.  Yet, these same companies continue to spend billions of dollars to construct new plants, as the Chinese government covers their losses.  This stands in contrast to South Korea and Japan where the companies must stand on their own.  With Chinese companies able to sustain losses indefinitely and with infinite government capital available to put in place new capacity, China continues to focus on its policy goal of dominating this industry globally by putting foreign rivals out of business and/or making them incapable of investing in new capacity.  Should such policy make the front page of the paper, U.S. and Western government action to rein in China globally would follow.  Not only would governments identify such policies immediately, but they would put in place counter policies to prevent the importation of these goods and any good that contained the subsidized item.  For those who believe such policies would fail, one need only look at the Steel Industry.  Once the U.S. put in place large tariffs on steel from China and other developing countries, Chinese steel prices magically levitated to global levels from prices clearly below the cost of their raw material, Iron Ore.  As a result, U.S. steel companies became profitable and able to add capacity to meet current and future U.S. demand.  Europe took similar action.

Should the U.S. and other Western nations focus once more on National Security and the need for domestic production, things will change dramatically.  Global Supply Chains will come under scrutiny to assess vulnerability in a future National Emergency.  And closing these vulnerabilities will force significant amounts of manufacturing back to the U.S., especially in areas such as Technology.  For companies that benefitted from globalization and Just In Time supply chains, this will come as a rude shock.  And with Congress already moving to close loopholes, even before a true National Security Debate, it seems just a matter of time until Just In Time becomes Just In Case.

(Data from public company reports, the Federal Reserve, and the Commerce Department coupled with Green Drake Advisors analysis.  For additional details on this coming National Security debate, please see the following articles:  The Rise of Economic Nationalism: Global Competition and The Fight for National Advantage Or Why Is All Global OLED Capacity Being Built in South Korea, China, and Taiwan published on May 31, 2017; The Great Game of Power: Trade Networks & The Rise of Mercantilism, The Re-Emergence of The Cold War, & The Return of the Yellow Peril published on December 31, 2017;  Currency Wars, Trade Wars, The Fight for Economic Growth & The New Cold War published on April 30, 2018; The Carrot & The Stick Part II: The Ascendance of the National Interest published on November 30, 2018; and The Great Game of Power: Cold Wars, Proxy Wars and The Path Well Trodden published on December 31, 2019.)