1940s Again: The Federal Reserve & US Government As One

With a national crisis, due to a virus hurricane that shut the economy producing all the collateral damage of an economic hurricane or a national sized earthquake, normal economic policy does not exist.  It becomes “All Hands On Deck!” with nothing out of bounds.  And the purpose of government morphs from managing the economy into preserving the economy to enable recovery and growth afterward.  In order to do so, the government must support both the financial system and the ability of the economy to generate demand.  This enables business commerce to continue and consumers to purchase the goods it can produce.  While a microcosm of this appeared during 2008 – 2009, the current drop in the economy likely will dwarf that by several magnitudes.  In fact the last times the economy saw such magnitude drops in such short periods of time were 1958 and 1938.

To combat such an economic hurricane, the government moves to wartime footing, putting in place economic policies typically used to fund a major war.  For the United States, this means utilizing policies last seen during World War II.  These policies typically take the form of massive government spending coupled with money creation in order to preserve the system as a whole.  And in order to manage the debts produced by the government during such crises, the central bank typically buys much of the debt, controlling interest rates while simultaneously monetizing the burden for the government and creating inflation to make it go away.  Based on recent actions by the Trump Administration and the Federal Reserve, the government sized up the magnitude of the issue, deciding normal economic policy could not apply and only typical wartime policies could succeed.

A quick look at these policies use from the 1940s will provide a good guide to how they might be implemented today. First, the Central Bank, in this case the Federal Reserve, moved to provide massive amounts of money to the economy to support economic growth.  From 1932 – 1936, the Federal Reserve almost doubled the monetary base, similar to what occurred during 2009 – 2015: 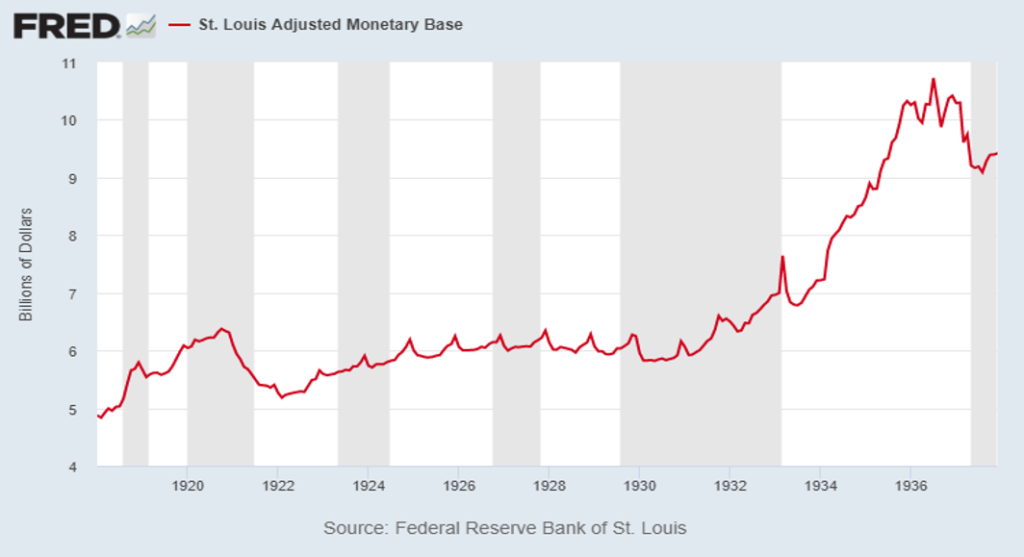 Then it became worried about inflation.  The led the Fed to tighten monetary policy by pulling money out of the system and raising the bank Required Reserve Requirements.  This monetary tightening coupled with a tax increase led to the 1937 – 1938 Recession, during which GDP dropped 10%, Industrial Production fell 32%, and Manufacturing Production collapsed 37%.  With the economy hitting the skids and the US beginning to ramp up production of war goods for Europe and itself, the Federal Reserve reversed course and started to add copious amounts of money to the system: 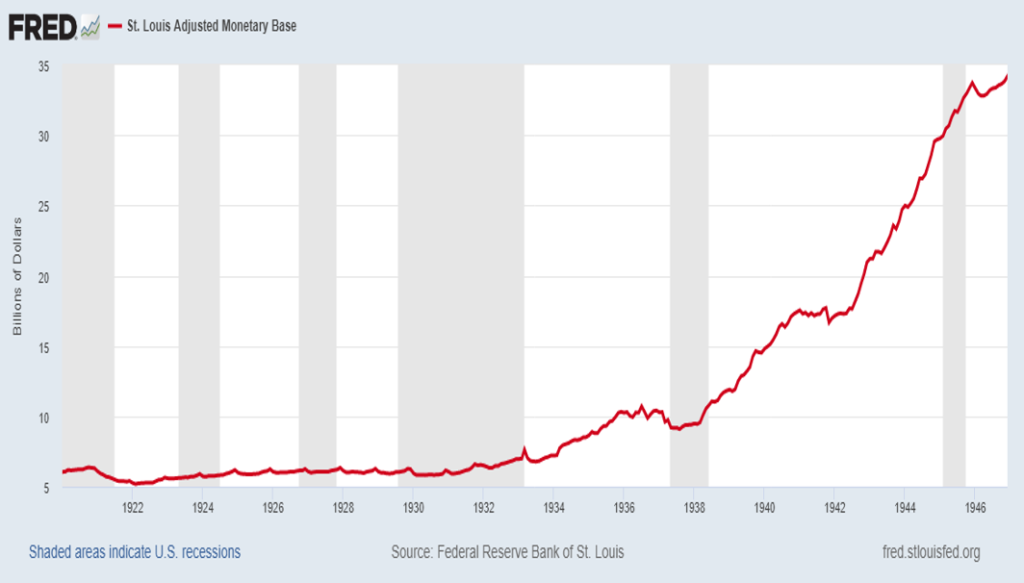 This continued until 1946 when World War II ended.  From 1932 to 1946, the money supply rose more than 6x.  While the today’s Federal Reserve recently reenacted the period from 1932 to 1938, it just began to adopt an encore performance of monetary policy from 1938 to 1946 as it realized its monetary tightening stood in error and that the economy needed enormous monetary accommodation.

At the same time as the Federal Reserve let loose massive amounts of money into the system, the Federal Government’s spending exploded upward.  As the following chart shows, Federal Spending grew exponentially until the end of World War II:

As one would expect, with the massive increase in money and the explosion in government spending, along with massive budget deficits, Inflation accelerated: 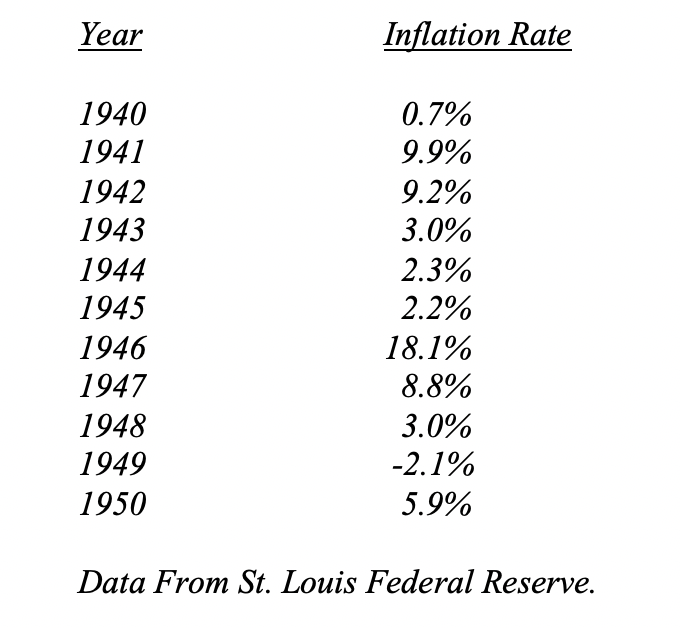 And prices cumulatively rose significantly over this time frame: 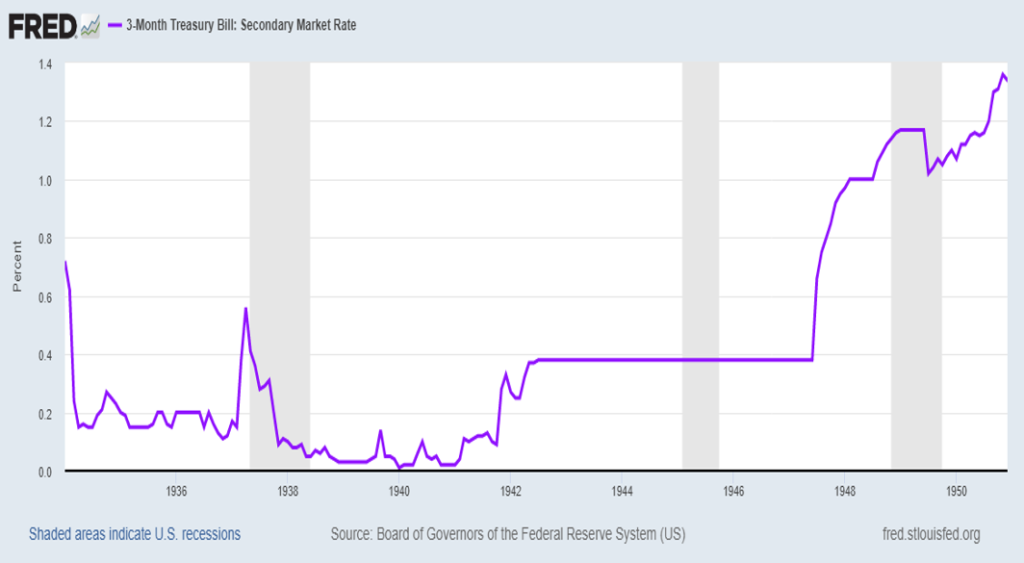 And, as a result, corporate interest rates stayed low as well: 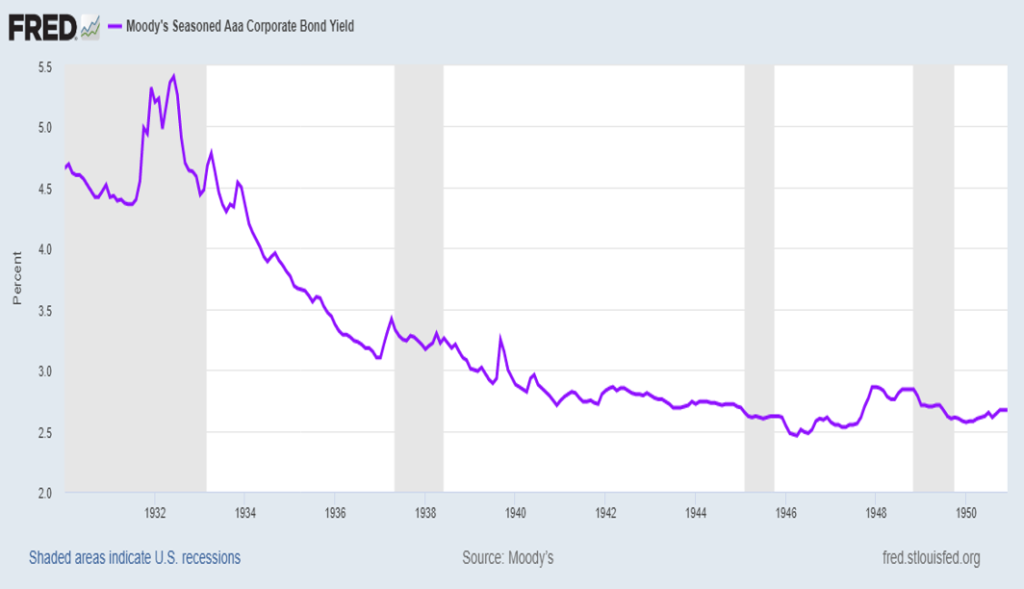 In fact, they fell as consumer goods were generally not available, except on the black market, and savings made their way into corporate debt.

With the Federal Government talking about spending of $1 trillion to fill the hole in the economy, through actual spending and helicopter money for the average American, Federal spending will likely rise over 20% in F2020 compared to F2019.  And with the government needing to meet its obligations under Social Security and Medicare and spend trillions of dollars on infrastructure, Federal spending could continue its rapid rise over the next decade.  Furthermore, should the government decide, for national security reasons, to force companies to move production of certain items back to the US, then the government likely would provide further economic inducements through either outright subsidies of these moves or tax breaks.  Either way, it would involve government led spending and likely a rising Deficit to GDP ratio.  With the Federal Reserve moving to buy corporate debt on top of both federal government debt and municipal government debt, it is looking more and more like The 1940s Again with The Federal Reserve and U.S. Government As One.  (Data from Federal Reserve of St. Louis coupled with Green Drake Advisors analysis.)