Song and Lyrics by Bobby McFerrin, 1988

With the Federal Reserve lowering interest rates and pumping money into the economy, that old mantra of the market dominated over the past year: “Don’t Fight The Fed”.  Those who attempted to do so got run over as the Equity Markets did an encore movie remake of their 1998 – 1999 and 1966 – 1967 performances.  This remake starred Presidential Year 3 Bull Markets, which average strong double digit returns, and followed as the movie sequel to last year’s movie, which starred Presidential Year 2 Bear Markets.  Last year’s movie was a flop at the investor box office, by the way.  So, the Federal Reserve decided to make a totally different sequel this year.  This one got rave reviews and turned into a blockbuster at the investor box office.

Next year’s sequel will likely star Presidential Year 4 Rally.  But a new villain will come into the picture called Mr. Inflation.  With the Federal Reserve under Jerome Powell’s guidance seeking an inflation overshoot of their 2% goal, to ensure inflation expectations don’t collapse and that Reflation takes firm hold, Mr. Inflation will likely make a brief appearance, while mostly lurking in the shadows.  Unfortunately, for the Federal Reserve and, ultimately, the markets, he will not feel content to lurk in the shadows.  And, like most evil geniuses, he will attempt to take over the world in the 2021 sequel.  For those who remember the 1969 original movie, this ended in tragedy and did not play well at the investor box office. In that original movie, the Federal Reserve rode into town to rescue the day and slay him.  However, their rescue attempt turned into a disaster movie when, in slaying Mr. Inflation, they created significant collateral damage.

Investors will need to keep all this in mind as this sequence of movies plays itself out over the next few years in a valuation background that looks like a cross between the Tech Bubble of the 1990s and the GoGo Years of the 1960s.  However, before the inevitable reversion to the mean in equity valuations occurs, a reacceleration in economic growth, fueled by stimulus around the world, will provide an opportunity to take advantage of cyclical Rotation within the market.  For, when economic growth accelerates, cyclical stocks tend to outperform growth stocks, which are coming off their best period of performance since the late 1990s.  According to data from J.P. Morgan, valuations sit at close to record disparities, as the following table illustrates:

The U.S. Equity Markets have already begun to recognize this coming acceleration in growth.  Yet, given this valuation disparity, the vast majority of performance from this Rotation still lies ahead.  Value sits at the same discount as existed in 2000, which preceded almost 7 years of outperformance.  And Growth Momentum, conversely, sits near the record valuations of 1999 – 2000.  It took over a decade for these stocks to recover to their old highs.  While the valuation disparity began to close over the past few months in the U.S., for the rest of the world, this Rotation in equity markets just began.  Thus, allocating to Europe or Asia or Japan would magnify the impact as these valuation disparities mean revert.  This Rotation will likely co-star in the 2020 sequel, Presidential Year 4 Rally.

Furthermore, should the US Dollar exhibit some form of peak, allocation to international equities would find further room to run above and beyond the Growth Momentum to Value Rotation.  From a fundamental perspective, the US Dollar stands overvalued as the following table shows:

And, as the chart below demonstrates, the US Dollar run-up puts its overall valuation back to where it stood in 2000, when it reached a similar level of overvaluation:

With the Federal Reserve lowering rates and focused on creating inflation, real rates in the United States have begun to fall.  As the interest rate differential with the rest of the world closes, the US Dollar should come under pressure and the recent advance halt and go into reverse.  For international equities, denominated in foreign currency. this would provide further performance support.  Of course, the difference between the Major Currencies of the Developed Markets, such as Europe or Japan, and the Developing Currencies of the Emerging Markets, such as Brazil or India, must factor into the decision, given the tendency of the EM to depreciate their currencies to aid their economies.  (For additional analysis of this difference, please see The Fight for Global Growth: Technology Leadership, Currency Wars, and The Death of the WTO published August 31, 2019.)  Despite this issue with EM currencies, the US to International Rotation will likely fill a Supporting Role in the 2020 Sequel.

Unfortunately, once we move towards the 2021 movie sequel, valuation will come into play.  Robert Shiller’s CAPE Ratio (Cyclically Adjusted P/E Ratio) will serve as the starting point for demonstrating how similar the valuations look to 2000 and 1929 and where they likely will head: 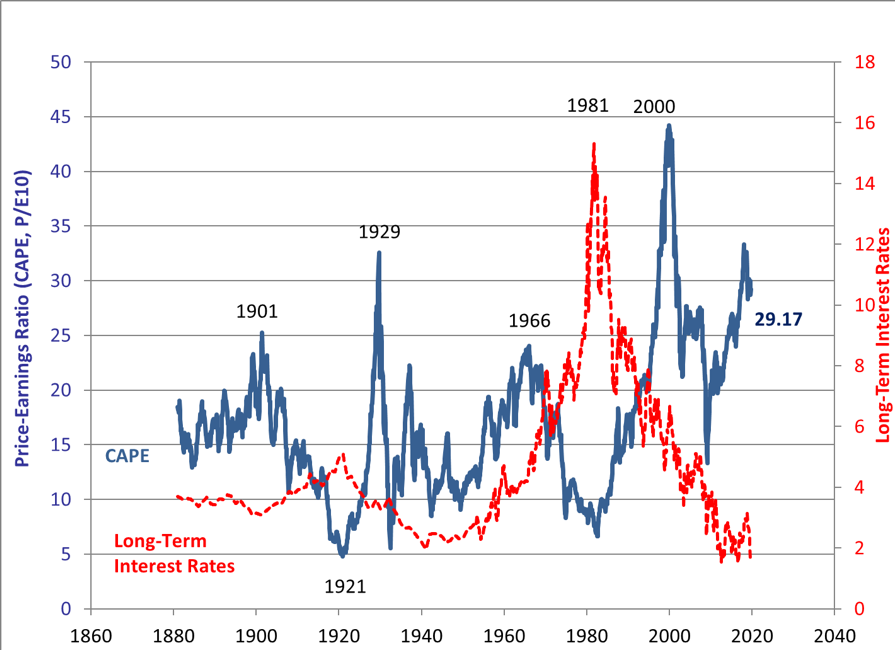 As the above chart makes clear, within a decade of those peaks, valuations fell by half.  This valuation compression will significantly impact long term returns.  However, short term returns may lie in a different direction, as in 1966 when valuations peaked.  After the Bear Market in 1966, the market afforded the nimble investor significant opportunities to make money as the Fed eased until its ultimate peak in 1968. 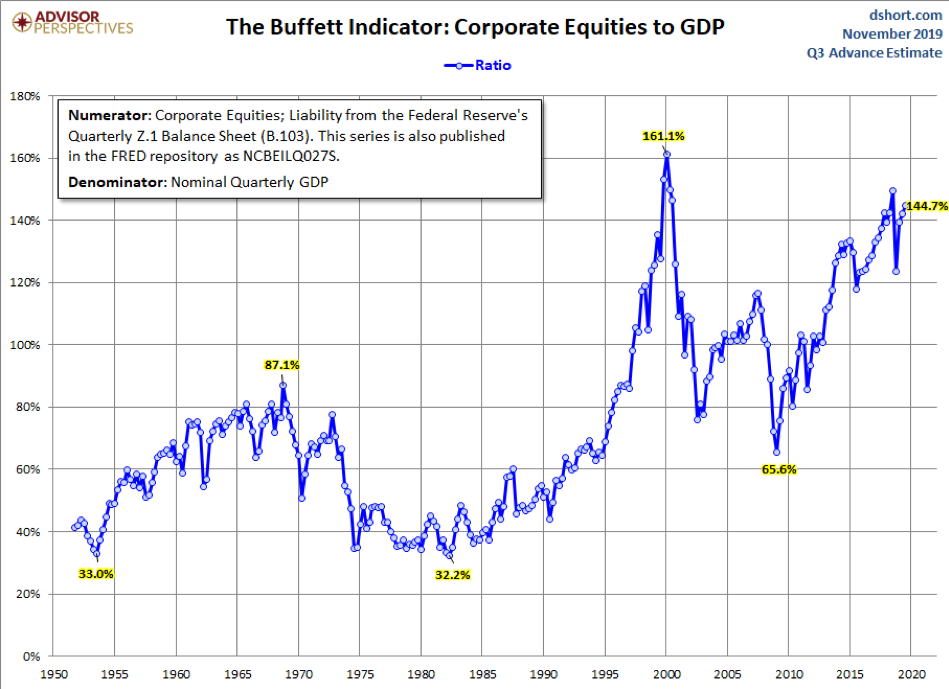 And Tobin’s Q Ratio, which measures the market value of companies relative to the replacement cost of their assets, looks no better: 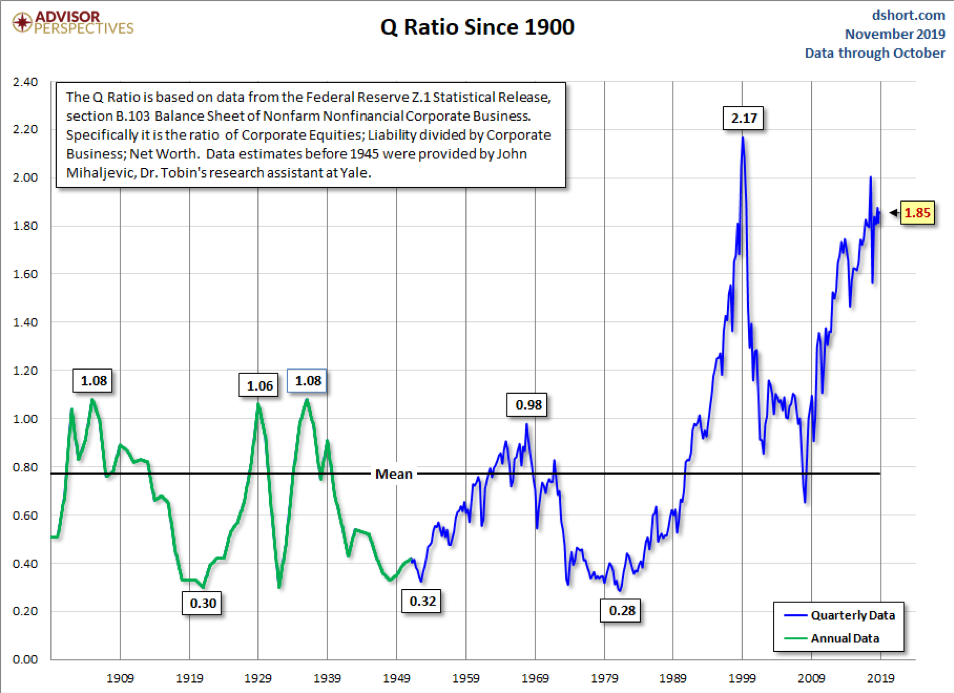 As the new villain, Mr. Inflation, introduced in next year’s movie sequel, Presidential Year 4 Rally, makes an appearance, these valuation levels will begin to look out of kilter with the underlying inflation rates.  And when he attempts to take over the world in the 2021 movie sequel, The Rise of Mr. Inflation, the impact on valuation could become significant.

For the next year, investors can bask in the glow of Reflation and Rotation.  As the U.S. and Global Economies accelerate once more, they should dominate, leaving next year’s movie sequel, Presidential Year 4 Rally with no surprise ending.  However, as the Ramifications of the Federal Reserve’s actions to ensure inflation overshoots their target of 2% become clear, previews of the 2021 movie sequel, The Rise of Mr. Inflation, will get released during 2020.  And, as the 2021 movie release approaches, investors will need to take full account of the potential roller-coaster ride such a movie will contain.  However, until the full Ramifications of the Federal Reserve’s decisions become clear, the theme song of the 2019 movie, Presidential Year 3 Bull Markets, will play in their ears.  And in the immortal lyrics and music of Bobby McFerrin, they will be singing, “Don’t worry be happy.  Don’t worry be happy now.”  (Data from J.P. Morgan Chase & Co., Federal Reserve, Advisor Perspectives, and Robert Shiller coupled with Green Drake Advisors analysis.)

Finally, we close with brief comments on Artistically Speaking, Oh Deere, and Here Fido.  First, the fall art auctions proved disappointing, to say the least.  Sales of Modern Art and Impressionists fell 52% at Christie’s and 40% at Sotheby’s.  Auction house claims of successful fall sales can best be thought of Artistically Speaking.  Second, the disastrous consequences of the poor weather this year are coming home to roost.  For the weather impacted not just crops such as corn and soybeans, but areas such as sugar beets, leaving no U.S. crop untouched.  For example, the early fall blizzard devastated sugar beet crops in Minnesota and North Dakota, which produce 54% of all sugar beets in the U.S.  As a result, major tractor manufacturers, such as John Deere and Agco, predict a poor 2020 for sales of these products.  For the companies that service the farmers, we see them saying Oh Deere.  And Third, police departments, such as the Massachusetts State Police, introduced the use of Robot Dogs over the past year, manufactured by Boston Dynamics.  These robots are used in hazardous situations, such as to examine suspicious packages or to enter areas with armed suspects.  Given the likely spread of these technologies to the consumer market, it may not be long before we hear the call of “Here Fido, want some oil?”