“When Roosevelt took office, our public debt stood at $22 billion. This represented the unpaid costs of the First World War and the deficits accumulated despite the Hoover Administration’s budget-balancing efforts. Between Inauguration Day 1933 and the eve of Pearl Harbor our national debt rose to about $48 billion. Thus, the total increase during this period of eight years and eight months averaged around $3 billion per year.

As against this, in one year of actual war we increased the public debt by $50 billion, a sum exceeding the deficit compiled by the nation in the preceding twenty-five years. By V-J day our war expenditures of approximately $380 billion left us with a public debt of $280 billion, or nearly six times what it was on the eve of Pearl Harbor.

Yet at no time was there any doubt that money would be forthcoming to wage war. The promise Henry Morgenthau made to General Marshall was honored in full. Our military leaders shaped their plans free from worry that they would lack money to pay for them. Moreover, while the war debt was built up, there was no change in the interest rates paid by the government on its various types of securities. Contrary to the prophecies voiced in February 1933 that an increase in the national debt would force our government securities into a fatal drop in value, the fluctuations that occurred were minor even though the national debt increased six times.”

On Wall Street a debate rages over the contours of the coming economic policy and its long term impact on the country, interest rates, and growth. This debate focuses on what is now called Modern Monetary Theory (MMT) with both its proponents and detractors vociferously voicing their opinions. The outcome of this debate will shape the contours of economic policy enacted by the U.S. Government over the next decade. Thus, it possesses significant implications for the actions that Congress and the Federal Reserve take and their impact on the U.S. economy.

Modern Monetary Theory stands for the next iteration of Monetary Policy for a Central Bank, what some now call Monetary Policy 3 (MP3), as it represents a natural evolution of policy. In doing so, it broadens the mandate for monetary policy, linking it intricately with the actions of the national government. Typically, a Central Bank uses traditional tools such as bank reserve management, monetary growth, and interest rate management to effect its policies. These tools typically work when economic growth moves along at steady rates with inflation of 3% or more, on average, over an economic cycle. These tools collectively are known as Monetary Policy 1 (MP1). However, when demand collapses in an economy, such as during the 2008 – 2009 recession or during the early stages of the Great Depression, this policy proves inadequate. Central Banks then must move to Monetary Policy 2 (MP2), what economists currently call Quantitative Easing (QE). QE focuses on offsetting a slowdown in the rate at which money circulates in the economy, what economists call Velocity. If this collapse occurs, it causes massive deflation in the economy, such as occurred from 1929 – 1932. In order to prevent a repeat, Central Banks in the U.S., Japan, and Europe adopted QE over the past decade, as occurred during the Great Depression from 1933 – 1936. The following charts show the utilization of QE during the Great Depression and its mirror image over the past decade:

And during the past decade:

In both cases, QE successfully offset the collapse in money circulation. In fact, it proved so successful during the Great Depression that the U.S. economy stood at the same level in 1936 as it did in 1929, before the economic collapse. Unfortunately, for the economy, in 1936 the Federal Reserve started to worry about inflation, just as the current Federal Reserve began to worry about inflation in 2015. As a result, the 1930s Fed moved to pull money out of the economy at the same time as it raised reserve requirements. As the top chart indicates, this led to recession in 1937 – 1938. To offset this new recession within the Great Depression, the Federal Reserve reversed its monetary policy adding money rapidly to the economy for the next decade, as the following chart demonstrates:

From this perspective, the 15%+ contraction in money from August, 1936 to August, 1937 became just a blip on the way to massive money growth. And this massive monetary growth underwrote the massive spending by the U.S. Government in order to employ people in the late 1930s and to fund the war effort during World War II. This combined partnership between the Central Bank and the Government represented the Central Bank underwriting the economy, now known as Modern Monetary Theory (MMT) or Monetary Policy 3 (MP3). One might say there is nothing “Modern” about this.

Despite this massive growth in money from 1938 – 1947, interest rates remained relatively tame, as the Federal Reserve controlled them. For example, the 3 Month Treasury Bill Interest Rate did not rise above 0.38% until July, 1947:

And, even then, in December, 1950, the 3 Month Treasury Bill interest rates stood at only 1.34%. In addition, long term rates stayed low, as the following chart of Moody’s AAA Corporate Interest Rates makes clear:

After the 1937 – 1938 Recession, corporate bond rates did not rise above 3.42% and averaged 2.75% from 1941 on. Thus, rates for the economy on long term borrowing, whether public or private, stayed low as well, effectively providing subsidized financing.

However, the same cannot be said of inflation. Inflation accelerated significantly during World War II and afterwards. Here is the year-over-year inflation rates from 1940 – 1952: 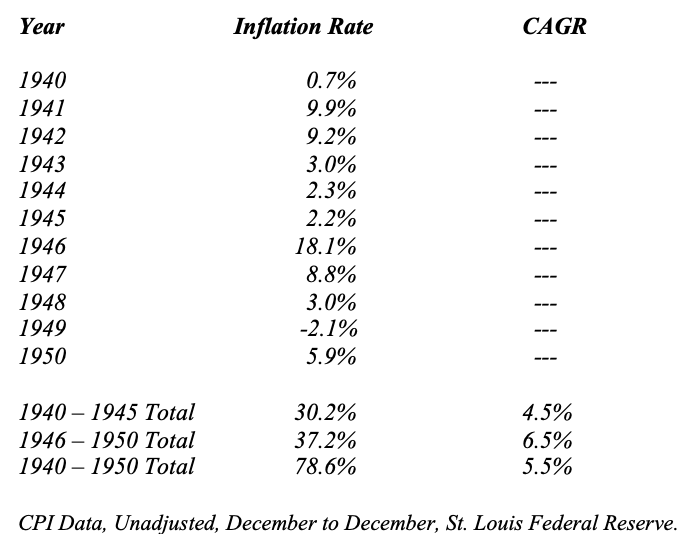 As the above table makes clear, significant inflation occurred from 1941 – 1950. In fact, the price level rose almost 80%. For the U.S. Government and businesses that could borrow, this provided a windfall. The bond issued at par or $1,000 in 1940 was repaid 10 years later with $1,000, but the real value of the $1,000 paid was only $560. In other words, bondholders suffered a 44% real loss on their money. This inflation resembles actions taken by the government during and after World War I, The Civil War, The Spanish American War, The War of 1812, and The Revolutionary War to inflate away government debt, making the real cost to the government significantly less. Of course, for the bondholders, this tended to be a bad deal as they were repaid in sometimes worthless scrip.

With U.S. economic policy Leaving the 1930s and Entering the 1940s, a well-trod path appears ahead. And whether today’s practitioners call it Modern Monetary Theory or something else, the end game is clear. The U.S. Government will boost spending to accelerate economic growth, while the Federal Reserve manages interest rates. And, acting in partnership, they will seek to address today’s economic malaise. For the U.S., this will represent a sea change as growing the real economy takes precedence. And should a little inflation accompany it, so much the better, from the government’s perspective. For the average American who owns their own home, this inflation will come as a windfall, as the cost of their mortgages stays static and their real value falls. For companies, faster economic growth should provide a better backdrop than the past decade. And for investors that understand this coming change, opportunities will abound. So, all on board, as the train heads for the 1940s, with MMT, MP3, and Old Fashioned Money Printing ahead. (Data from The Federal Reserve coupled with Green Drake Advisors analysis.)