The Parties to this Treaty reaffirm their faith in the purposes and principles of the Charter of the United Nations and their desire to live in peace with all peoples and all governments.

They are determined to safeguard the freedom, common heritage and civilization of their peoples, founded on the principles of democracy, individual liberty and the rule of law.

They seek to promote stability and well-being in the North Atlantic area.

They are resolved to unite their efforts for collective defense and for the preservation of peace and security.

They therefore agree to this North Atlantic Treaty:

In order more effectively to achieve the objectives of this Treaty, the Parties, separately and jointly, by means of continuous and effective self-help and mutual aid, will maintain and develop their individual and collective capacity to resist armed attack.

The Parties agree that an armed attack against one or more of them in Europe or North America shall be considered an attack against them all; and consequently they agree that, if such an armed attack occurs, each of them, in exercise of the right of individual or collective self-defense recognized by Article 51 of the Charter of the United Nations, will assist the Party or Parties so attacked by taking forthwith, individually and in concert with the other Parties, such action as it deems necessary, including the use of armed force, to restore and maintain the security of the North Atlantic area. 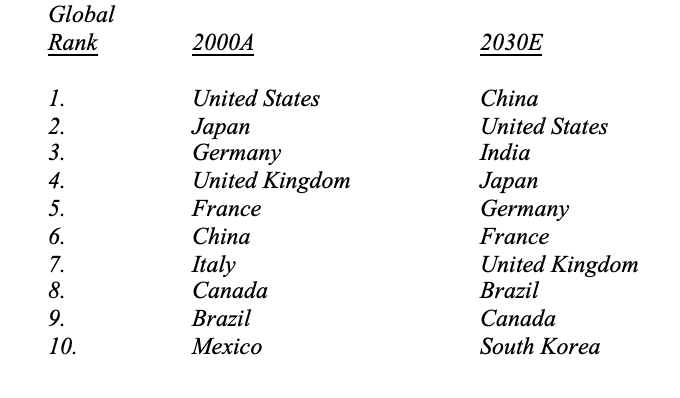 For much of the Western public and the Western media, the world they know today is the World of 2000. However, for the 195 countries across the globe, the reality of this new emerging Global Economic Order of 2030 stands front and center. As this reality comes closer and closer over the next decade, relations with countries such as China and India will become as important for countries as relations with the United States, with tremendous implications for how countries interact with each other both economically and politically.

For the Western economies, the implications of 50 years of aiding economies like China, India, Malaysia, and Ghana, to grow faster than their economies, have come home to roost. Western economies now represent a minority of the global economy on a PPP basis, as the following chart shows. 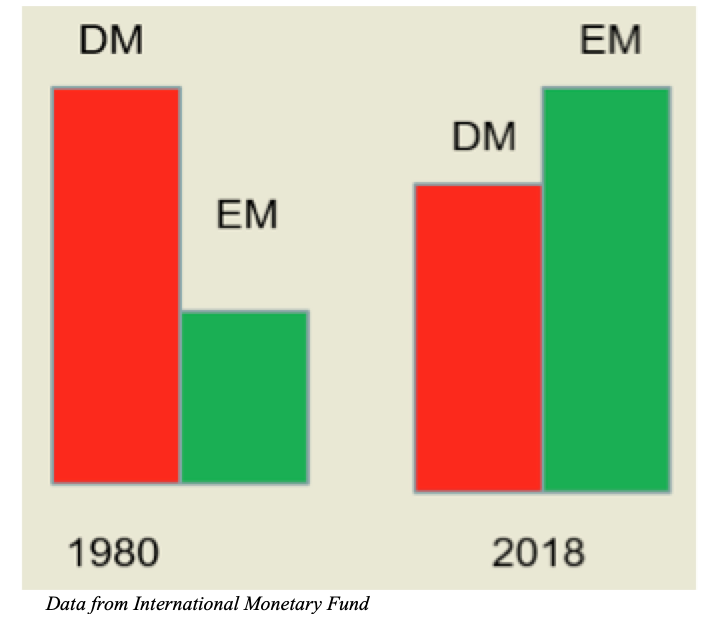 Furthermore, their economies continue to lose global share under the institutions and policies they erected in the 1950s and 1960s. In order to put an end to this share loss and maintain their relevance over the next few decades, they need to recapture their share of international growth and enable their economies to grow at a more rapid rate. In order to accomplish this, the rules of engagement between countries must change and the key economic policies must adapt to these new rules. As a result, international institutions constructed over the past 40 years, like the WTO, will continue to fall by the wayside as Western economies move to change the rules of engagement so as not to be left behind.

Of course, the first country to recognize this reality is the United States. With it clear that the rules no longer enabled its economy to grow at its traditional rate and stood as an impediment to its ability to maintain its global economic share, the US unilaterally acted over the past two years to protect its position in the global economy. This meant voiding rules that held its growth back and forcing changes to open up more opportunity for its economy to participate on a global basis. And when these changes would not find themselves accommodated by other countries, the country acted to put the interests of its citizens ahead of other countries. While this offended and will continue to offend many entrenched interests, who find their vested stakes in the existing system at risk, the initial result for the U.S., as a country, appears positive, despite the noise in the media. Productivity Growth, the bedrock of economic growth and higher real incomes, recovered to over 2%, potentially enabling faster economic growth over the long term. And, as a side benefit, casualties overseas in other nations industries will slow their GDP growth. In fact, some recent data indicate that the Emerging Economies, as a whole excluding China, now grow at a rate similar to the United States. Simply put, through a willingness to upend the status quo, the U.S. appears to have forced a change in the global equilibrium that will allow it to grow at the rate of Global GDP once more.

Other Western nations have not missed this result. The internal political pressures to produce faster economic growth continue to build. For example, Italy returned to the potential issuance of BOT to pay its citizens and companies for the work they do for the government. The BOT will act, in essence, as a second, parallel currency in place of the Euro, whereby Italians could pay the government any taxes or other payments due in BOT. They could also use this to pay local governments and each other. While the Italian government will not call this the Lira, lest they offend the Germans, if it walks like a duck, looks like a duck, and quacks like a duck, it is a duck. Or, as the Marx Brothers would say, Why A Duck, as it acts like a viaduct between the Euro and a new currency. (For those wishing to view the famous Marx brothers Why A Duck? routine and the Cocoanuts movie, they can view it at https://www.youtube.com/watch?v=J5izciEMkvw .) With the Italians having invented modern banking, recreating their currency would enable them to reassert control over their economy and undo the damage from the Euro, allowing their manufacturing to recapture all the share it lost over the past 20 years to Germany.

For Australia and Germany, a different issue awaits. While the U.S. stands a traditional ally due to the outcome of World War II and their allegiance during the Cold War, economic reality dictates a reconsideration of this relationship. For Australia, trade with China stood at almost $75 billion in 2018, representing over 5% of its GDP, compared with less than $10 billion in trade with the United States. As a result, although the country maintains a political and defense relationship with the United States, its economy depends much more on China. This change in economic relationship shows in its internal politics, whereby the party not in power would engage with China in a way that would lessen the influence of the United States. Should they come to power, the alliance between the U.S. and Australia could come under some strain. Germany presents a different facet of the changing world economy. While the U.S. still maintains its role as Germany’s top export destination, China now stands not far behind, as #3. In addition, the United States continues to pressure Germany on its export policies, on its defense spending as part of NATO, and on its plans to import more Russian natural gas. Germany has pushed back, fighting against a rearrangement of the trade relationships, refusing to bend on defense spending, and attempting to reassert its traditional role in Central Europe, from its past during the 1800s. While not sufficient to change its alliance with the U.S. yet, the strain between the two countries continues to grow creating a Fracturing Alliance.

For Emerging Asia, with the Chinese economy ascendant, risks abound on every side. Asia, excluding China and India, exports 32% of its GDP. Of these exports, over 70% end up in the United States and Western Europe as finished goods. With China and the United States having a disagreement on trade coupled with China becoming the largest economy in Asia, the jury is out on the outcome for Emerging Asia. For some items like shoes, these countries will benefit. While China saw its U.S. import share of shoes drop below 50% for the first time in years, Vietnam gladly took its place, representing a clear boost to its economy. For the U.S. and Vietnam, this stands as a good outcome. However, in the areas of technology or other high value manufactured goods that China targets, such a positive, mutually beneficial outcome might or might not occur. For national security reasons, the U.S. easily could justify insourcing production of many technology and industrial goods to service its economy and its military. To the extent countries wish to benefit from China’s growth and from exports to the U.S., they could get caught in the middle, forced to choose sides. As China’s exports slowly but surely drop to the U.S., the actual source of much of the value in those exports will become apparent. As a result, new countries will come under scrutiny. To the extent they stand with the U.S. in opposing China’s rise, the U.S. might turn a blind eye to these imports. However, should they try to play both sides against the middle, the U.S. might use the club of access to its markets as a way to force choice between the two sides. With one third of their economies dependent on these exports, these countries will have no choice but to play ball or see the ramifications of trying to ignore a major customer.

As these snippets make clear, the change in the global economic order over the past 30 years will change the global dynamic. With economic relationships changing, countries that hitherto were allies may find themselves on the opposite side of the table. Countries that were formerly pitted against each other might find themselves allying against a common foe. For those used to a stable dynamic, this may come as a shock. But as The Great Game of Power continues to play out, The Coming Global Realignment should surprise no one. (Data from public sources coupled with Green Drake Advisors analysis.)