The Coming Bond Storm Part 3: The Bill Comes Due

For corporate management over the economic cycle since 2009, corporate cash flow served the mantra of “shareholder value”.  This focus led public company executives to buyback copious amounts of stock, shrinking their floats in the process.  On average, shares outstanding fell by 2%+ per year for the S&P 500.  Thus, if a company’s underlying Revenue and cost structure supported 6% Net Income growth then the company’s Earnings Per Share (EPS) grew at 8%+ per year, for example.  And, if a company’s management followed this diligently for a period of time, say 5 years, then a company’s EPS grew 47% instead of 34%.  This mass shrinkage of the public float coupled with the “alignment” of management with the shareholders through massive stock options, stock appreciation rights, and an alphabet soup of compensation programs disproportionately focused on the share price, led management to focus on driving the stock price upward at the expense of company growth, capital investment, and the balance sheet.  As a side benefit, the value of management compensation exploded upward and overstated the performance of management in driving a company’s fundamental growth.

Unfortunately, these actions led to a variety of behaviors with significant consequences for the long term shareholder.  First, corporate management’s fundamental metrics of revenue growth, earnings growth, capital investment, and delivering returns on the incremental capital invested became less important.  Thus, management became less accountable for growing a company, driving market share, and investing in the company’s future than in growing the share price.  Second, by significantly underinvesting in capital investment, two significant consequences result.  The first is that a company’s capital employed stops growing.  In other words, the company shrinks its capital base.  This enables company management to increase the reported return on investment.  Stock valuations are related to a company’s return on capital.  Thus, by driving return on capital upward through underinvestment, a company’s management could drive the valuation of the stock upward. The other significant consequence of underinvesting in core capital is Depreciation as a percent of a company’s core cash flow fell.  This led to Operating Income rising faster than the fundamentals would dictate.  An example will make clear how this works: 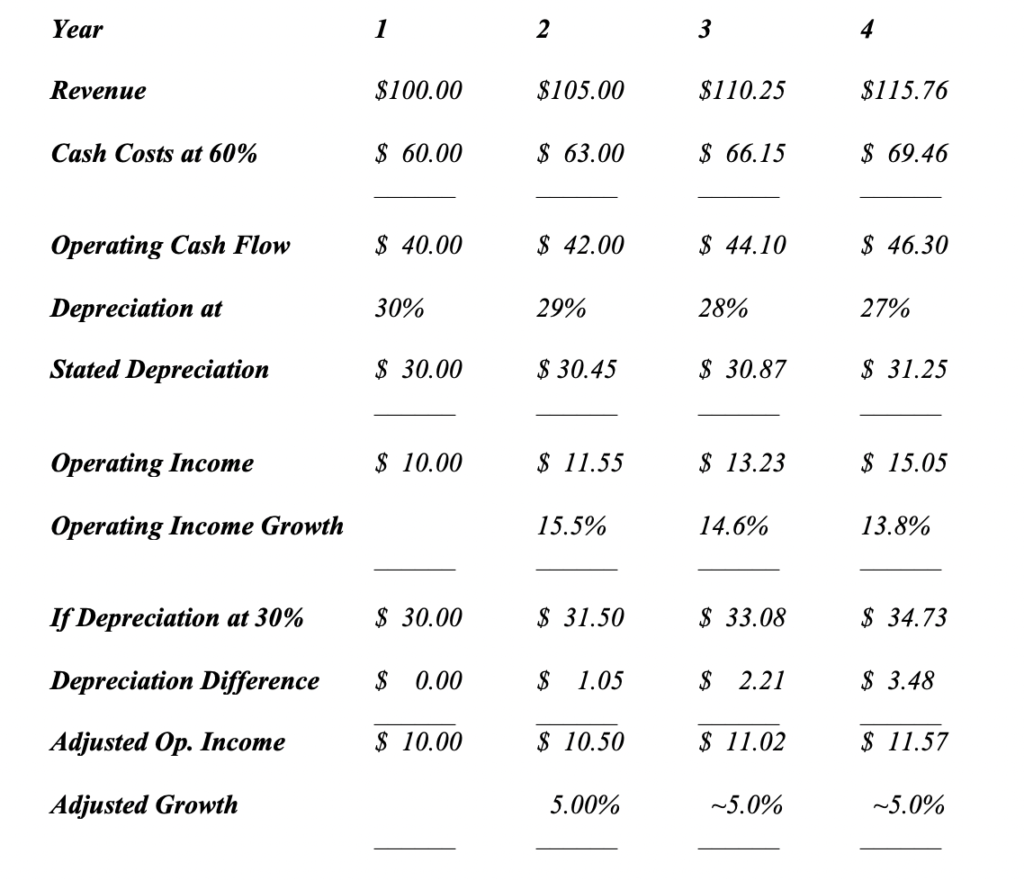 So, while a company’s management might report double digit Operating Income growth, the fundamental performance of the company in terms of Revenue and Operating Cash Flow did not change from single digit growth.  Thus, a company management could overstate the growth rate in income by underinvesting in the company.  This would further enhance the valuation of the company’s stock as valuations also are impacted by the growth rate in earnings.  And data from JP Morgan indicate that while the S&P 500’s EBITDA as a Percent of Sales, the proxy for Operating Cash Flow, remained constant over the past 20 years, Operating Income as  Percent of Sales grew, as Depreciation to Sales fell.

Of course, these benefits occurred without the massive leveraging of public corporations whereby company’s not only repurchased stock with cash flow but with additional debt in order to shrink the public shares as quickly as possible.  When an economy grows, this is not an issue.  However, when a recession occurs, as part of the normal economic cycle, and profits fall, the additional debt put in place to buy back stock as opposed to funding productive assets, which can service the debt, becomes a lodestone.  As Adam Smith stated in 1776:

“The stock which is lent at interest is always considered as a capital by the lender.  He expects that in due time it is to be restored to him, and that in the mean time the borrower is to pay him a certain annual rent for the use of it.  The borrower may use it either as a capital, or as a stock reserved for immediate consumption.  If he uses it as a capital, he employs it in the maintenance of productive labourers, who reproduce the value with a profit.  He can, in this case, both restore the capital and pay the interest without alienating or encroaching upon any other source of revenue.  If he uses it as a stock reserved for immediate consumption, he acts the part of prodigal, and dissipates in the maintenance of the idle, what was destined for the support of the industrious.  He can, in this case, neither restore the capital nor pay the interest, without either alienating or encroaching upon some other source of revenue, such as the property or the rent of land.”

Chapter IV: Of Stock Lent At Interest
Book II: Of The Nature, Accumulation, and Employment of Stock
The Wealth of Nations

Public companies now face the dilemma of Adam Smith’s “Prodigal”.  The bogeyman, in the form of a sudden recession, stands at the door.  And corporate managements must scramble to preserve their companies in the face of sudden cash flow shortfalls and exploding debt spreads as they ate the seed corn through share buybacks.

For those corporations with reasonable balance sheets, costs have risen, but not out of sight.  The following charts from the Federal Reserve make this clear.  While a chart of the spread between BAA Bonds, which are strong investment grade securities, appears worrisome:

The absolute BAA Bond Yield is below where it stood several years ago:

And, from a long term perspective, rates remain quite reasonable:

Even for those companies barely investment grade, sitting at BBB Ratings, life continues apace.  Spreads have shown a similar increase:

And rates continue to remain reasonable:

However, for the below investment grade, such as BB Rated debt, while spreads have shown a similar lift:

While for lower grade credits, such as CCC or below, spreads to Treasuries now exceed 18%:

So, High Yield Debt, or what is prosaically known as Junk Debt, performed as expected.  And companies, such as WeWork, stand at risk as they customarily do during a recession.

However, for the economy as a whole, the real risk stands in the BBB Debt.  BBB Debt totaled $670 billion in 2008 and made up only 33% of publicly outstanding debt for public companies.  In contrast, as of December 31, 2019, there existed over $3.0 trillion of BBB Debt, almost 4.5x as much as in 2008 despite an economy which grew less than 50% in nominal terms.  Furthermore, it now comprises over half of all publicly traded debt.  As of March 31, 2020, BBB Debt traded at a yield below 4.75%.  Should it fall one notch to below investment grade, such as BB, the interest rate would jump to almost 7.00%.  And should the global economic recession turn out more than a blip, lasting more than 6 months, then a portion of the BBB Debt stands at risk for further downgrade into true High Yield Debt of CCC or lower.  Thus, a number of companies could find access to credit markets cut off and the interest rate on their debt rising to almost 19.00% or more.  This would potentially bankrupt a number of firms, creating further disruption in the economy.

In addition to the $3.0 trillion in BBB Debt, there exists $1.2 trillion or more of “Leveraged Loans” in the banking system.  These loans typically possess characteristics of BB or below public debt.  Thus, they stand at similar risk of downgrade with company cutoff to the capital markets.  And on top of these loans, there exists a large amount of lending through the “Shadow Banking” system.  This system aggregates the myriad of private lenders that filled the gap after Dodd Frank accelerated the move away from bank lending.  Due to the restrictions on bank leverage and loans from the Dodd Frank legislation, these lenders make up the majority of the lending to corporations today.  In many cases, corporations cannot pay the interest on these non-traditional loans.

With a recession upon the country, the excesses of the past decade have become exposed.  One of the principle excesses stands in the immense leverage corporations put in place to buy back $4.2 trillion of stock instead of saving for a rainy day and investing in the future of the company.  With Congress well aware of these actions by corporate management over the past decade, legislation will likely follow the recession.  This would serve a similar purpose to Dodd Frank to prevent companies from taking actions that endanger the country and put the average voter at risk.  However, just as in 2008 for the banks, it will not undo the excesses of the last decade.  And, just like in 2008 for the banks, corporations will bear the brunt of the fallout from their use of debt as The Bill Comes Due.  (  Data from the Federal Reserve and JP Morgan coupled with Green Drake Advisors analysis.  For those wishing to review in further depth our prior analysis, Part 1 may be found in the Monthly Letter dated May 31, 2018 titled: The Coming Bond Storm Part 1: That 1980s LBO Game Again, Repurchasing to the Poorhouse, & Love That Covenant Lite.  While Part 2 may be found in the Monthly Letter dated December 31, 2018 – The Coming Bond Storm Part 2: Leveraged Lending, Covenant Lite, and The Coming Credit Cycle.)